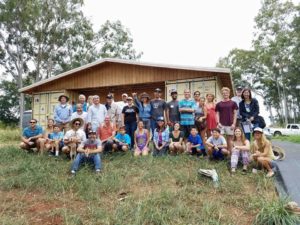 Ideally this would become a model to spread veteran beekeeping programs nationwide to assist veterans and families of veterans through bees. We see Beekeeping as a pathway to economic stability, closeness with nature for post-traumatic stress support, reintegration into civilian life with fellow service members, continued education, career training, social networking and a fascinating hobby that supports agriculture and natural ecosystems.

HAVE-BEES project will train veterans by providing all the necessary materials (bee hives, colonies, and all the beekeeping equipment such as veils, smokers, hive toots, foundations, honey extractors and all the medicines for the diseases and parasites) for each participant veteran. Veterans living on Oahu and Hawaii will be given an introduction to keeping bees the first year, queen rearing during the second year, instrumental insemination, apiary economics and other advanced topics on the third year.

All veterans can become Master Beekeepers and Queen Breeders during the project or just enjoy the program as much as they feel comfortable participating. They will have the opportunity to build a sustainable beekeeping business and produce honey, pollen, propolis, royal jelly, queen bees and produce package bees and/or nucleus colonies, delve into bee research or share beekeeping lessons in their local community as educators.

We have had monthly workshops on Oahu and we are scheduled to continue that through Jan. Events are posted on the online resources hub-

We hope to grow into a thriving online community that can sustainably build and steer the program to support Beekeeping, veterans, first responders, education and agriculture locally. All of which we believe are the unsung heroes which truly support our local communities. 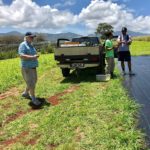 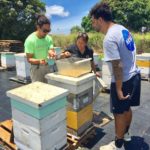 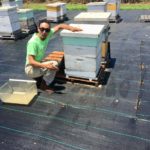 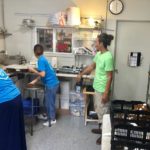 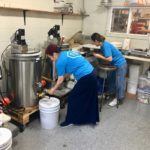 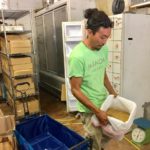 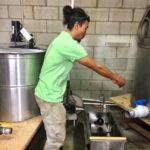 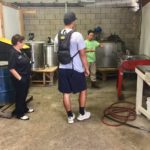 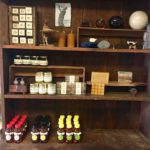 Location(s): Manoa Honey Company in Wahiawa and the Bee Farm in Mililani, Hawaii. Big Mahalo to Kino for being such a great trainer and mentor to our Veterans!

Raising Quality Queens in the Heart of Paradise

Besides being honey producers, bees are critical pollinators for many food crops, including melons, watermelons, cucumbers, squash, lychee, mango, macadamia nut, coffee, eggplant, avocado, guava, herbs and some flowering plants, such as sunflowers. HDOA estimated in 2007 that about 70 percent of Hawaii’s food crops depend on pollination by bees.

“The circumstances of this particular problem is that it’s good people noticed there was a problem and notified the Department of Agriculture, but it also highlights that if beekeepers are interested and want to do things like collecting swarms or doing hive removals, they really ought to be careful about what they do,” he said. “They don’t want to intermingle a new hive with their own stocks. That’s just asking for problems. There should be a quarantine, period. Watch it carefully. Be responsible.”

Small hive beetle adults are about four to five millimeters in length and are yellowish-brown in color, turning brownish, then to black at maturity. They feed on most anything inside a beehive, including honey, pollen, wax, as well as honeybee eggs and larvae. As they feed, they tunnel through the hive, damaging or destroying the honeycomb and contaminating the honey.

The arrival of honey bees to Hawai’i

In the late 1890’s, interest in beekeeping rose dramatically for two reasons. U.S. Mainland entrepreneurs saw fortunes in ranching, and subsequently introduced large numbers of cattle to the Islands. Feed for cattle was needed to sustain large populations, so the industry began wide scale cultivation of kiawe. A native tree of Italy, this species was introduced to Hawaii in 1828 by Father Alexis Bachelot, head of the first Catholic Mission to Hawai’i (Greene 1941). Kiawe grows well in dry hot climates, yields nutritious beans for feeding cattle, shade for roaming herds, sturdy wood for fence posts, and an even and slow burn as charcoal. To increase kiawe bean yield, honey bee hives were established near ranching operations to promote pollination. In addition, it was found that kiawe nectar produced a very good light honey, so commercial honey production followed. Kiawe blooms from March until September, and a single kiawe tree with a thirty-foot spread has the potential to produce over two and half pounds of honey yearly (Nieman 1942). Kiawe forests rapidly expanded, and by 1935 one hundred thousand acres on Maui and even larger areas of the island of Hawai’i were covered with the trees, becoming Hawai’i’s foremost nectar source (Nieman 1942).

Sugarcane cultivation and the accidental introduction the sugarcane leafhopper Perkinsiella saccharicida Kirkaldy also stimulated the growth of the beekeeping industry. Leafhoppers feed on sugarcane and produce a sweet excretory product called honeydew. Bees in areas where sugarcane was cultivated found honeydew irresistible as a substitute nectar source. Though bees preferred nectar from flowers in bloom, they often turned to collecting honeydew when flowers were unavailable. The abundance of leafhoppers stimulated nectar collecting and produced greater honey yields. Colonies grew rapidly and hived off into new colonies.

The abundance of the sugarcane leafhopper prompted the Hawaii Experiment Station to take a more active interest in bee culture beginning in 1905. Station employees were instrumental in bringing new and improved strains of queens and worker bees to Hawai’i. Efforts were also made to increase the number and range of nectar and pollen sources.

O’ahu’s strategic placement in the Hawaiian archipelago saw the first introduction and successful establishment of honey bees cited earlier. The beekeeping industry itself was actually “born” on O’ahu, on a balmy Sunday afternoon in 1893 when a swarm of bees blown by the trade winds appeared in the back yard of the brothers Lee and Oswald St. John Gilbert in Honolulu (Nieman 1942). This marked the beginning of the Sandwich Island Honey Company. The brothers, having no prior knowledge of bees, quickly set up hives and immersed themselves in research. They eventually purchased the exclusive right to place bees on all islands (Chamber of Commerce 1941). Oswald St. John Gilbert earned the nickname the “Honey King.” O’ahu’s other honey venture, The Hawaiian Honey Company, was located in Ewa and managed approximately eighteen hundred colonies of hybrid bees, yielding some 180,000 pounds of honey annually. Incorporated in 1901, Hawaiian Honey Company shipped some fifty to sixty tons of honey and wax from Honolulu, and was famous for its “Crystal” and “Vitalic” brands. By 1907, the first beekeeping association was formed to advance and protect the interests of the industry. Commercial beekeeping interests were steadily growing. By the early twentieth century, the Sandwich Islands Honey Company and two other businesses had incorporated. At its peak, Sandwich Islands Honey was reported to have had ten thousand colonies in operation (Eckert and Bess 1952) and by 1908, an estimated twenty thousand hives were established on all major islands managed by seven corporations and numerous individuals (Crawford 1937). O’ahu’s beekeeping industry was most robust at the beginning of the twentieth century and reached its peak in the mid 1930s, but was later destroyed by Foulbrood. O’ahu did not develop ranching to the degree that the outer islands did, so the driving force that developed the beekeeping industry on those islands was not as evident here.

Propolis, a commodity lesser-known to many, is a mixture of plant resins and gums collected by workers to insulate the hive by sealing cracks and crevices. Propolis is collected using special equipment, or by scraping the propolis from the covers and edges of hives during inspections. Propolis is used in a variety of processed products including tinctures, toothpaste, and chewing gum. Given the multitude of products extracted from hives and the efficient, thorough job of plant pollination conducted by honey bees year-round in Hawai’i, it is no small wonder that the honey bee is an important resource to Hawai’i.

The first successful hives of bees arrived on O’ahu in 1857. Though honey bees slowly established themselves over the next few decades, few took interest in them. Only at the turn of the century when entrepreneurs saw a potential fortune in honey production, did growth ensue. Soon, lucrative honey ventures appeared on all major islands. Unlike O’ahu, Hawai’i Island’s interest in honey bees was primarily for algoroba Prosopis pallida pollination. Algoroba, a rich and nutritious cattle feed, is also known as mesquite, and known locally as kiawe.

Donations can be made via mail.