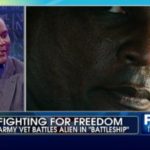 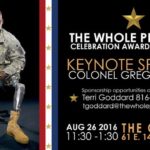 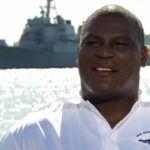 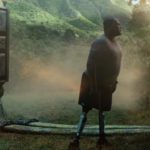 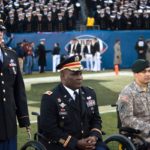 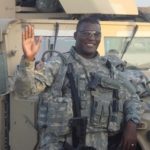 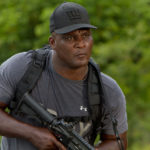 U.S. Army Colonel GREGORY D. GADSON as Mick in “Battleship” an epic-scale action-adventure that unfolds across the seas, in the skies and over land as our planet fights for survival against a superior force. 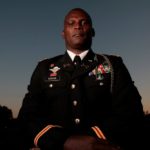 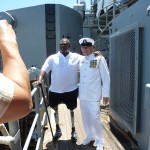 Gregory D. Gadson (born February 19, 1966) is a retired colonel in the United States Army and the former garrison commander of the U.S. Army Fort Belvoir.[1] He is also a bilateral above-the-knee amputee, occasional actor, and motivational speaker. He served in the U.S. Army for more than 20 years as a field artillery officer and served on active duty for Operations Desert Shield and Desert Storm, Operation Joint Forge, Operation Enduring Freedom, and Operation Iraqi Freedom.

Gadson attended the United States Military Academy at West Point, New York, graduating in 1989. He also holds a master’s degree in information systems from Webster University and a master’s degree in policy management from Georgetown University.[2] He is a graduate of the Command and General Staff College and the Advanced Field Artillery Officers Course and in 2010, he became an Army War College Fellow at the Institute of World Politics in Washington, D.C.

On the night of May 7, 2007, while returning from a memorial service for two soldiers from his brigade, he lost both his legs and severely injured his right arm to a roadside bomb in Baghdad. He became one of the first military personnel to use a next-generation powered prosthetic knee with technology to make it possible for amputees to walk with confidence and with a more natural gait.[4]

Col Gadson is also authorized to wear the Combat Action Badge and the Master Parachutist Badge.[5]

He won the prestigious Henry Viscardi Achievement Awards in 2017 given by Viscardi center to honour the extraordinary leaders with disabilities.[6]

Gadson played football at West Point between 1985 and 1988, wearing the No. 98 jersey and serving as co-captain. In 2007, he was present when the New York Giants beat the Washington Redskins at FedExField at the invitation of West Point classmate Mike Sullivan, who was then on the coaching staff of the New York Giants. This win was the beginning of a 10-game road winning streak and came after Gadson had made an inspirational speech to the team. The streak culminated in the Giants winning Super Bowl XLII.[7] and in recognition for his contribution, Gadson received a specially minted Super Bowl ring.[8] Gadson has since remained with the team as a motivational speaker.

Gadson made his acting debut in Battleship, a 2012 American science fiction naval war film, as Lieutenant Colonel Mick Canales, playing a war veteran who regains his appetite for the fight when Oahu is threatened by an alien attack. Director Peter Berg, having seen news articles about Gadson, decided to cast him as an army officer trying to recover from the loss of his legs.[9]

Gadson has been an avid photographer for many years. His work has been most recently been featured prominently in Coming Home: Journey, Community, Dialog, a public art project based in New York City that seeks to encourage communication between civilians and those who have served in the US military.[10]