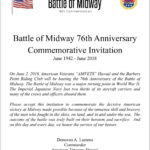 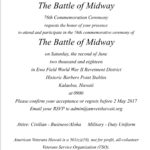 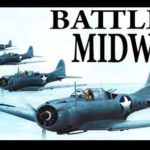 On June 2, 2018, American Veterans “AMVETS” Hawaii and the Barbers Point Riding Club will be hosting the 76th Anniversary of the Battle of Midway. The Battle of Midway was a major turning point in World War II. The Imperial Japanese Navy lost two thirds of its aircraft carriers and many of the crews and officers aboard them.

Please accept this invitation to commemorate the incredible victory at Midway made possible because of the immense skill and bravery of the men who fought in the skies, on land, and in and under the sea. The outcome of the battle was truly built on their heroism and sacrifice. And on this day and every day, we honor the service of our heroes.

Benjamin Resnick is a historical archaeologist and a senior director/assistant vice president with GAI Consultants, Inc., a full-service engineering and environmental consulting firm.

Ben specializes in the study of historic-period resources focusing on military sites, urban sites, farmsteads, and GIS-based applications to archaeological predictive modeling. He has authored or coauthored numerous reports and publications over the last 30 years including articles in the SAA Archaeological Record, Interpreting Space: GIS in Archaeology, The Archeology of Landscape and Geographic Information Systems: Predictive Maps, Settlement Dynamics, and Space and Territory in Prehistory, South Carolina Antiquities, Industrial Archaeology, and a public monograph entitled, For the Sake of the Living: A Civil War Battlefield Burial, Gettysburg National Military Park.

His topic: Ewa Field South Revetment Historic District and the Battle of Midway

Daniel A. Martinez is Chief Historian for the WWII Valor in the Pacific National Monument. His areas of responsibility include the USS Arizona Memorial and Visitors Center, the USS Utah Memorial, the USS Oklahoma Memorial, and the other Historic Sites along Battleship Row.

The Committee for the Battle of Midway 76th Commemoration Ceremony requests the honor of your presence
to attend and participate in the 76th commemorative ceremony of the Battle of Midway on Saturday, the second of June two thousand and eighteen in the World War II Revetment District Barbers Point Stables, Naval Air Station, Kapolei, Hawaii 96706 from 0900 – 1100.