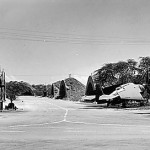 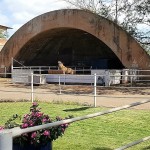 Such a designation would expand the recognition of Ewa Field; up to about 180 acres of the Dec. 7, 1941, portion of the battle site that are separate from the revetments already are on the national and state registers of historic places.

Also, the Kohala Center, a community-based research, conservation and education group, received $75,000 to create a cultural resources management plan for the Kuamoo Battlefield and Burial Grounds, a 47-acre parcel in Keauhou-Kona on Hawaii island “where one of the most significant battles in Hawaiian history was fought in December 1819,” the park service said.

Valerie Van der Veer, president of the Barbers Point Riding Club, obtained the $63,000 grant and will manage the funds for the revetment study. Barbers Point Stables operates primarily for military families on Navy-owned land and has 34 of the distinctive half-dome concrete and earthen-covered aircraft revetments.

A total of 75 revetments were built in 1942-43. The majority are on land turned over to the Department of Hawaiian Home Lands by the Navy.

“The entire community of Ewa Beach and Kapolei basically has no idea that this gem is hidden right in the midst of them,” Van der Veer said. “At some point we’ll be able to become a community venue, whether it’s as a riding stables or whether it’s as a World War II revetment district or whether it’s highlighting the paniolo story that was here long before our military version of the stables. But there’s a place in it for everyone.”

Ewa historian John Bond, another driving force in obtaining historic recognition for Ewa Field, said he’s often wondered why no one took the initiative to preserve parts of the now weedy Marine Corps airfield — before he and Van der Veer took steps to do so.

“This is World War II history in our backyard,” Bond said.

The Ewa site served as the forward Marine Corps airfield in the Hawaiian Islands during World War II. On Dec. 7, 1941, the Marines had 48 aircraft at Ewa — most of which were lost on the ground to attacking Japanese aircraft. Four Marines were killed, along with two civilians.

“Some of them (the revetments) go way back into the jungle there — you go back in there and it’s like going into Inca (ruins) in South America,” Bond said, adding he’s found writing on walls from 1943.

Van der Veer, who previously obtained $54,000 in grant money for the study of the Ewa Plain Battlefield, said she’d like to see covenants put in place to protect the historic integrity of the revetments. It’s not clear what plans, if any, DHHL has for the land. The state agency could not be reached for comment Thursday.

The Navy previously said the stables were built in the 1950s. In the 1960s the stables hosted the first professional rodeo held in the isles, club members said.

The National Park Service also said it was designating $75,000 for a Kuamoo Battlefield and Burial Grounds cultural resources management plan. In late 2015 Aloha Kuamoo Aina, a nonprofit, and the Trust for Public Land announced they had acquired the site.

The organizations said in a news release that in the 1819 Battle of Kuamoo, Hawaiian forces clashed over the traditional kapu religious system. “The dispute pitted the forces of Kekuaokalani, nephew of Kamehameha I, who sought to preserve the traditional system, against his cousin, Liholiho (Kamehameha II), who had abandoned the kapu system. Liholiho was victorious, but many warriors from both sides perished in battle and were buried on the property,” the release said.