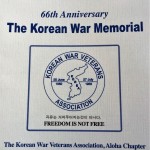 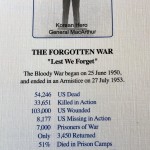 The Korean War began on June 25, 1950. It was the first military conflict of the Cold War, pitting the Soviet-advised North Korean People’s Army, which later had massive support from communist China, against a U.S.-led coalition of United Nations forces supporting South Korea.

On May 30, 2016, veterans of that war will move down Constitution Avenue in Washington, DC, participating in the National Memorial Day Parade, but most importantly, paying tribute to their fellow soldiers, sailors, airmen, and Marines who perished in that war, many of whom have yet to be brought home.

Starting at 2:00 p.m., Korean War Veterans Association (KWVA) president Larry Kinard will lead the veterans, some being driven in vintage Korean War military vehicles. In addition, numerous Korean-American war veterans will march down the avenue, accompanied by Korean-American ladies, who will be wearing their traditional native costumes.

Other events on that same day that will recognize the price of freedom and honor all those who gave their lives in defense of the United States and the Republic of Korea include:

The placing of a wreath at 12:00 p.m. at the Tomb of the Unknown Soldiers in Arlington National Cemetery by KWVA president Kinard and Major General Kyoung Soo SHIN, the Defense Attache’ at the Embassy of the Republic of Korea.

The presentation of wreaths at the Korean War Veterans Memorial (on the National Mall) at 5:00 p.m., by representatives of the KWVA, the Korean War Veterans Memorial Foundation (KWVMF), and the American Indian Veterans Association (AIVA). Remarks will be made by Major General Shin, KWVA president Kinard, Colonel (U.S. Army, retired) Bill Weber (KWVMF), and AIVA president Don Loudner.

The primary mission of the KWVA is to raise awareness of numerous events that commemorate the history of the Korean War, not just among the American people, but also the Korean War veterans and their families themselves, many of whom remain unaware of these events that are frequently conducted in their honor at sites across the United States. Another important mission of the association is to assist and support the Defense POW/MIA Accounting Agency (DPAA) in its efforts aimed at the repatriation of thousands of American servicemen, whose remains are still north of the Demilitarized Zone (DMZ).